Kirtlington Park is a quintessential British Stately Home in the heart of Oxfordshire. In collaboration with ByChenai Weddings & Events based in London, Blooming Haus set out to style a contemporary wedding day story against this backdrop. We included several locations in this shoot, such as the historical bedrooms and a short boudoir/getting-ready shot. We then moved on to the first dress look of the day and took shots outside on the terrace and on the grand staircase.

With the beautiful views of the estate at the front of the house, we styled a wedding breakfast table on the front terrace. With a very delicate blush texture linen, supplied from Just 4 Linen, we layered elegant rose-pink chargers and gold cutlery with glass crockery to give the luxury feel, which were supplied by Duchess and Butler. We added the rose candelabras with extra-long ivory tapered dinner candles from Ester & Erik to give height to the table. We created 2 large floral urn arrangements to frame the setting. The table flowers were a divine mix of Japanese roses and perfumed British roses. The blush-toned blooms included striated tulips, earthy toned eustoma and wild scabiosas. Foliage of fragrant geraniums and wild ivy and touches of fruit on the table added extra interest. We used similar flowers in the bridal bouquet and in the boutonniere for our groom.

The first dress that our model Sophia wore was the Ava dress which has a structured, pleated piece that creates a collared look at the neck. Instead of using traditional hair accessories, Kelvin Nguyen, our brilliant hair and make-up artist continued the English garden floral theme by using blooms to create a headpiece that was placed at the nape to create a dramatic effect.

When we moved to shoot indoors, we wanted to remove some formality of the collared dress you would wear once formalities of a ceremony had been done. Here, Sophia was in the simple strapless figure-hugging gown, as she sat with Graham at the piano and in the drawing-room. We then moved into the evening where Chenai had the vision of Sophia being the girl who wanted to dance barefoot into the night. Sophia wore wide-legged trousers from Rita’s Audrey collection, teamed with the Julia cape jacket from Rita’s Julia collection and a simple camisole. We changed Sophia’s structured hair-up do and pulled her back in a simple style, finished with a red lip for the evening.

We wanted our groom to be in a traditional tuxedo look. Graham perfectly wore a classic black tuxedo.

We wanted the cake to be simple and luxurious in texture. Clare, from Clare’s Cakery, created a butter-cream 3-tier ruffled cake, which we then adorned with blush flowers. We then used a batch of dainty macarons made by Colline Bakes, in vanilla and berry flavours, to complement the display.

Chenai wanted the stationery to be classic, and almost dainty. Scritto, therefore, created a beautiful blush-toned calligraphy set for our stationery and a mirrored table plan with a gold frame to echo the classic styling of the building.

Sonia Collett
Founder and Editor of the WTW blog. Sonia set up Want That Wedding over 7 years ago - after her own wedding day. During the planning process, Sonia realised she had a mad crazy love for all things wedding and continues to be a total wedding obsessive to this very day! Happiest when swooning over newlyweds real weddings or beautiful wedding dresses... she's also an incurable romantic who is rather fond of anything that glitters. Follow her on Instagram (wantthatwedding), Twitter, (@wantthatwedding), Pinterest (wantthatwedding) and Facebook (wantthatwedding)
Recommended Posts
Comments 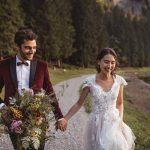 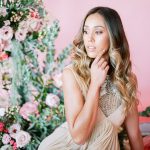